This article is about information leaks in form of memory disclosures created in Internet Explorer 10 32-bit on Windows 7 64-bit. They are used to bypass full ASLR/DEP to gain remote code execution. While the software containing the bug might not be that popular, it’s quite nice what can be done with the bug.

Reading this article requires some familiarity with WinDbg, heap spray , and info-leaks.

Hope you enjoy it.

I discovered a vulnerability in an ActiveX Control with the rather oldscool tool COMRaider. The ActiveX Control is a video plugin from X360 Software. Let’s take a look with IDA Free 5.0 into it.

While there are no immediate control flow pointers like on the stack, maybe other pointers can be overwritten to achieve interesting things towards program manipulation and remote code execution. Exploitation on Windows XP may seem straightforward due to the absence of ASLR, but what if we want to target some Internet Explorer on Windows 7 or 8? At the end I decided to take that route.

To bypass ASLR, we need an information leak in order to disclose some interesting memory usable for further steps. After some experimentation with calling the SetText method and calling other plugin methods subsequently, some pointers catched my attention.

For example, the content at address .data:10092068 can be controlled via our buffer overflow. This pointer is used in sub_10058BAA which in turn is executed when the plugin’s exposed SetFontName method is dispatched.

When we call SetFontName with a string of size smaller or equal to 0x40 the following happens:

We hit the function sub_10058DAB which retrieves the string’s length and calls sub_10058BAA with the length as 1st argument: 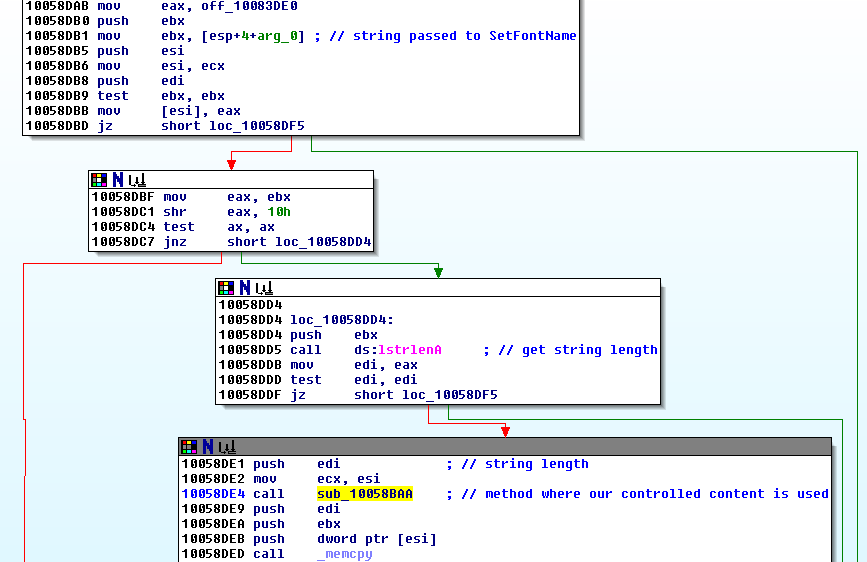 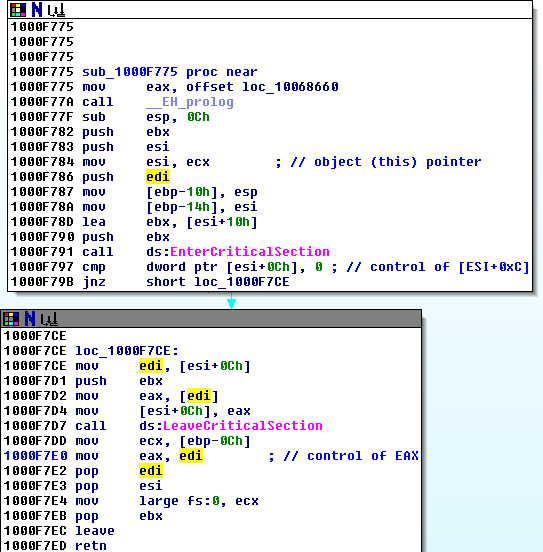 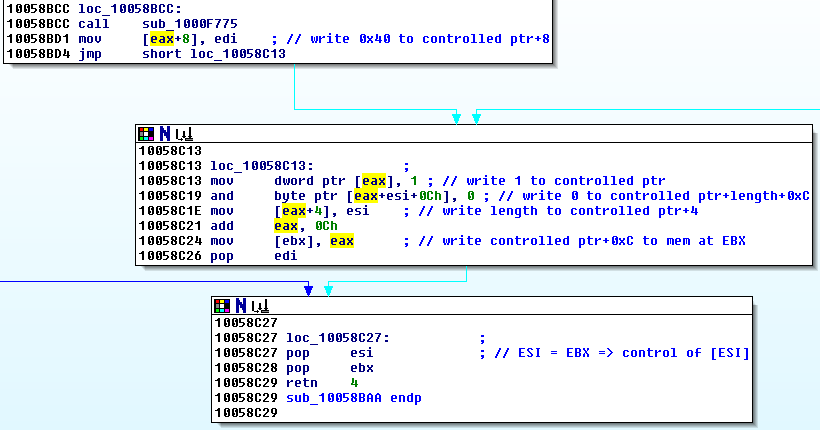 This might be already enough to overwrite the length of a BSTR JavaScript string or a length field of an array to create an Info-Leak. During runtime ESI holds the same address as EBX. So we also control [ESI], and gain control over the destination argument of a memcpy when we return into sub_10058DAB from sub_10058BAA.

Back in sub_10058DAB, the string length in EDI is pushed as 3rd argument, the string pointer in EBX as 2nd, and our controlled value in [ESI] as 1st argument before _memcpy is called: 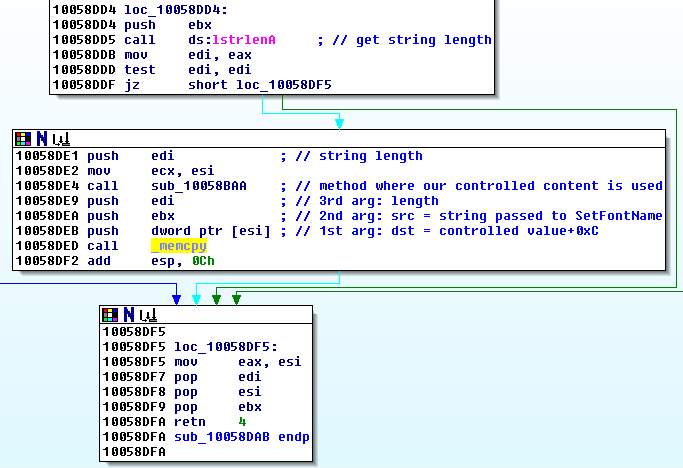 We can use the following to abuse the call to _memcpy, perform an arbitrary write and return without a crash into the JavaScript context. We spray the heap first and then write 0xcafebabe to address 0x1010102C using SetText and SetFontName:

We can attach WinDbg to our running Internet Explorer and view the modified memory starting from 0x10101020 which was previously filled with 0x22222222:

As we can modify any memory arbitrarily (despite the “side effect” values and the appending NULL), we can use tech-niques to make the complete memory readable and writable from JavaScript.

Instead of spraying the heap with strings we use arrays. We create blocks of memory with a size of 0x10000 bytes which become aligned to 0xXXXX0000. The first 0xf000 bytes are filled with a generic array and typed array headers (objects) follow which fill the remaining page. As each typed array header has a size of 0x30 bytes, they become aligned after the generic array data to 0xXXXXF000, 0xXXXXF030, 0xXXXXF060 and so on:

Finding the modified typed array is easy: We iterate over all typed arrays and check if their first elements are unequal to zero. It is successfull when we hit the modified array, as its first element points to a typed array vtable. Then we use the modifed array to change the subsequent typed array header: We set the length at 0x1111F048 to 0x7fffffff and the arraybuffer pointer to the start of process memory, namely 0x0. And we can do this with array element writes ( arr[k][i][6] = 0x7fffffff   and   arr[k][i][7] = 0x0 ).

After the vulnerability and the subsequent manipulation has taken place, we can view the typed array headers in WinDbg:

At that point we have a typed array usable from JavaScript like any other array but with the ability to get and set the complete memory!

As we have a memory readwrite interface we can use it via array accesses to read and write arbitrary memory.

So we can use JavaScript code which asks you for an absolute address and returns the content at that address. If you test it, be aware to supply a mapped address, otherwise you get a crash.

A message box should pop up showing the resulting content interpreted as DWORD:

This is consistent with the WinDbg output we saw before.

As the heap layout is predictable we can set any object as element into a generic array and leak its address. For example, we can put the ActiveX object as first element into the generic array residing below the page with the manipulated typed array headers. As the array is aligned to 0x11120000, we know that the object’s pointer is located at 0x11120020 (20 bytes are occupied by allocation and array metadata). We simply supply   0x11120020/4   as index to our memory interface array and get the object’s address. You can test it by uncommenting line #102 in the leaking script and supplying   0x11120020   to the prompt box. To verify it with WinDbg, enter   dd 0x11120020 .

When we leak content at a specified address and know that the content is a pointer itself, we can use the retrieved content as an index into our memory interface array again. This way, we can subsequently dereference object fields in order to read and rewrite them.

Finally it’s time to pop some calculators. So there’s of course a PoC which achieves code execution and runs calc.exe.

Just a short description what is happening there:

Et voilà! We’ve bypassed full ASLR and DEP and got remote code execution with a buffer overflow in the data section. Fun!